The 9/11 was inadequately investigated and incorrectly and superficially diagnosed. The price was the twenty years of relentless Hybrid (Intelligence) War attacks, large and small, deadly and symbolic, intimidating and threatening in their nature and directions. This undeclared, invisible, masked Cold War 2 culminated in the Trump Presidency, Corona Pandemic (I think the connection is present), and the Capitol Riot of 1.6.21. The same mistake of the inadequate investigation, committed again, can be very costly. It very well might be the existential threat, in its various aspects.

“All roads lead to Putin”, Nancy Pelosi diagnosed the situation in five words. I agree with her, it is almost obvious. I will take this Interpretation a couple of steps down the same logical road:

2. I came to believe that the German Military Intelligence after WW2 played the major role in all the historically significant World events and made inroads into the other services and the Government structures, including the FBI, the CIA, the State Department, etc., etc. The structures of the Russian State were penetrated in a similar fashion, however more secretively, carefully, and discreetly. I call this the New Abwehr Hypothesis of the major World events after WW2.

3. I believe that behind the 9/11 is the the hypothetical, very powerful and skillful structure of the New Abwehr. They use the Arabs, the Russians, the Chinese, the Israelis, and others as their covers.

4. I think that the New Abwehr hypothesis has to be researched and investigated in the utmost depth. You cannot cure or even help the illness if your diagnosis is incorrect. It makes it worse. And there were a lot of incorrect diagnoses in both the Medicine and in the Intelligence Work. Not the political correctness but the complete and total independence in the Intelligence and the Counterintelligence Analysis. Speak Truth to Power.

The Delphic Truths are the greater truths. They are the intuitive correct diagnoses, the sacred whispers, the dreams coming from the depths. They are the Essence, they are the Truth. Their coherence and internal consistency, logic and knowledge differentiate them from delusions and conspiracy theories. However, these Delphic Truths have to be checked out and convincingly translated and proven in clear and evidence based concepts and language. 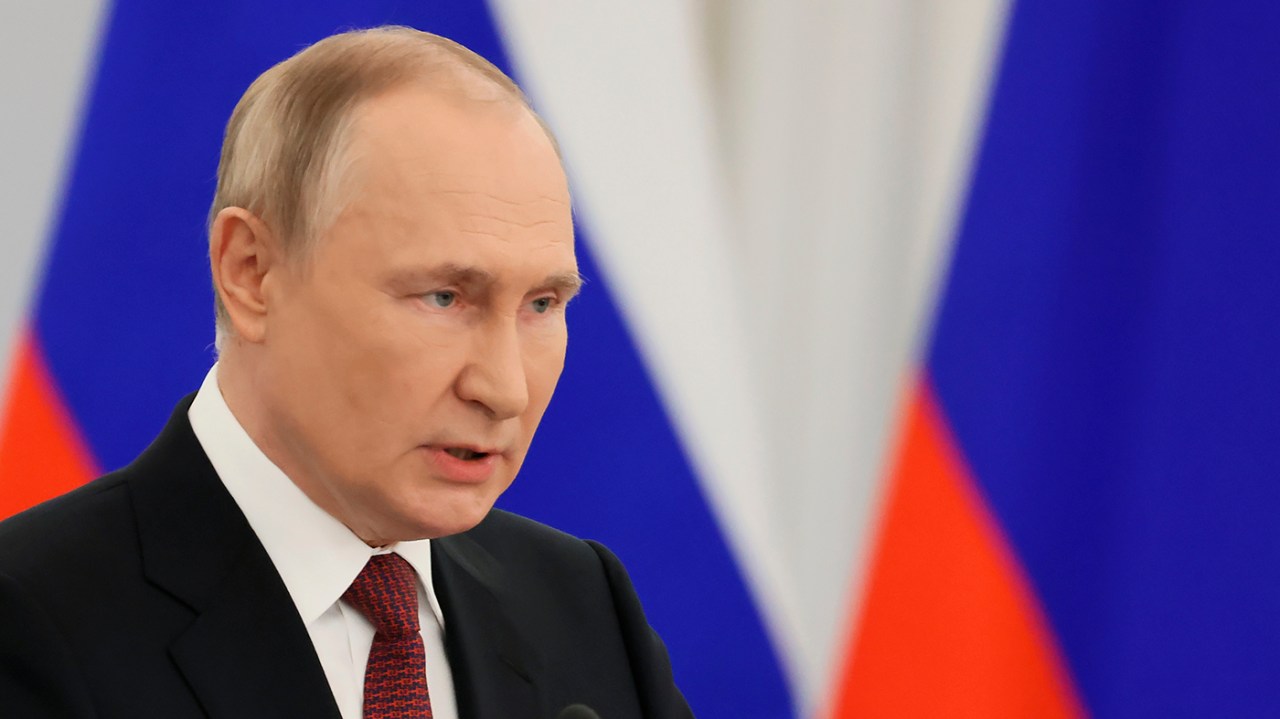 Russian President Vladimir Putin’s move Friday to annex parts of southern and eastern Ukraine amid Moscow’s war in the country has elevated the stakes of the conflict, threatening to bring the Kremlin’s struggling military campaign closer to the doorsteps of the West.

The stunning move has prompted a flurry of activity across the globe, including new U.S. and Group of Seven (G-7) sanctions targeting Russian government and military officials and their family members, international condemnation, calls for more weapons for Kyiv and a fresh push from Ukraine to join NATO.

But Putin’s actions — an indication he has dug in his heels in his military campaign against Ukraine — have much broader and longer-term repercussions for the future, experts say. What exactly those will be, however, are hard to discern, with experts expressing a deep uncertainty over where the situation will go from here.

“I think there will be continued warnings about breaking any of the red lines that have been put down. And there will be, I think, further strengthening of sanctions … Beyond that, it’s hard to anticipate exactly what might happen,” said career ambassador Thomas Pickering, who served as U.S. ambassador to the United Nations as well as Russia.

Putin on Friday signed four “ascension treaties” to annex the Donetsk, Luhansk, Kherson and Zaporizhzhia regions of Ukraine after holding sham referendums in the areas.

“This is the will of millions of people,” Putin told hundreds of dignitaries amid a lavish ceremony at the Kremlin in Moscow.

Much of the world, including members of the G-7 and the European Union, have already vowed to never recognize the land grab, while Ukrainian President Volodymyr Zelensky called the move a “farce.”

“The entire territory of our country will be liberated,” Zelensky promised in a pre-recorded video released after Putin’s speech.

The annexations are the biggest territory grab in Europe since World War II and come as Putin has grown increasingly aggressive in his rhetoric due to a markedly successful Ukrainian counteroffensive earlier this month that took back large swaths of ground and forced Moscow’s forces to retreat.

Putin continued that saber-rattling in a speech laden with anti-Western sentiments, pledging to defend the newly claimed regions with “all available means,” a non-veiled threat to use nuclear weapons.

Russia has dangled the threat of an attack with a nuclear weapon since the start of its invasion of Ukraine, but the new land steal has spiked fears over how Moscow will respond to attacks in these territories now declared part of the Kremlin.

“Would he actually go to the use of nuclear weapons? Nobody knows. But it remains obviously something that he’s unprepared now to take off the table,” Pickering told The Hill.

Another question raised is whether the Russians will stick to their messaging that taking the eastern-most area of Ukraine known as the Donbas region remains the limited objective of their invasion, as suggested in Putin’s speech. The Kremlin has focused on taking the area since its failed campaign to topple Kyiv, but it’s unclear whether Moscow will be open to ending the war should that be achieved.

“Would that in its own way lead to discussions that could take place diplomatically over next steps that might tone things down? I think that’s a very optimistic view, but a moment not very likely given Mr. Putin’s dug in responses on every development that has taken place of upping the ante,” Pickering noted.

Also undetermined is the renewed debate over whether NATO should allow Ukraine to join after the country on Friday announced it will file an expedited application to the military alliance, which Kyiv has sought to enter since Russia’s annexation of the Crimean Peninsula in 2014.

The United States quickly urged that such a process “should be taken up at a different time,” according to national security adviser Jake Sullivan.

“Right now, our view is that the best way for us to support Ukraine is through practical, on-the-ground support in Ukraine and that the process in Brussels should be taken up at a different time,” Sullivan told reporters Friday.

But Jonathan Katz, director of Democracy Initiatives and a senior fellow with The German Marshall Fund of the United States, said Ukraine’s NATO bid is a serious application in the wake of Putin’s speech and amid his ongoing desperate bids to make gains in a war that has become bogged down in its seventh month.

“It must be taken seriously. … how can anyone think that Ukrainians, or the West, the transatlantic community, can be safe with Mr. Putin doing what he’s doing,” he added.

The issue will likely come up at a meeting of defense ministers for the North Atlantic Council Oct. 12 and 13 at NATO Headquarters in Brussels.

For now, U.S. and Western officials say they are focusing on crippling Russia through economic means, with the Biden administration on Friday announcing a new round of sanctions.

The sanctions, which come from the departments of Treasury, Commerce and State and in coordination with members of the G-7, are meant to target Moscow’s decisionmakers, Putin’s allies and entities that support Russia’s military-industrial complex.

Secretary of State Antony Blinken said the sanctions are a clear warning that there will be “costs for any individual, entity, or country that provides political or economic support to Russia as a result of its illegal attempts to change the status of Ukrainian territory.”

One thing’s certain in the aftermath of Putin’s move: continued U.S. support to Ukraine.

The House on Friday passed a stopgap spending bill to stave off a government shutdown that included another $12.3 billion in aid for Ukraine.

News also broke Friday that the Pentagon was preparing to step up efforts to train and equip Ukrainian troops through a proposal to create a new command based in Germany, as The New York Times reported. Such a command, which would be led by a top U.S. general, would streamline the current patchwork of training and assistance given to the Ukrainian military by the U.S. and allies since Russia attacked the country in February, according to the Times.

And House Foreign Affairs Committee ranking member Michael McCaul (R-Texas) on Friday called for the U.S. and its allies to send Ukraine weapons it has so far held off from providing over fears doing so could escalate Russia’s ire.

Earlier this week the administration pledged another $1.1 million in lethal aid to the embattled country, bringing the total Pentagon commitment to Ukraine to more than $16 billion since February.

The latest dollars will go to contracts for weapons to be delivered over the next several years — a signal that the U.S. believes Russia will continue to threaten Ukraine and the region for years to come.