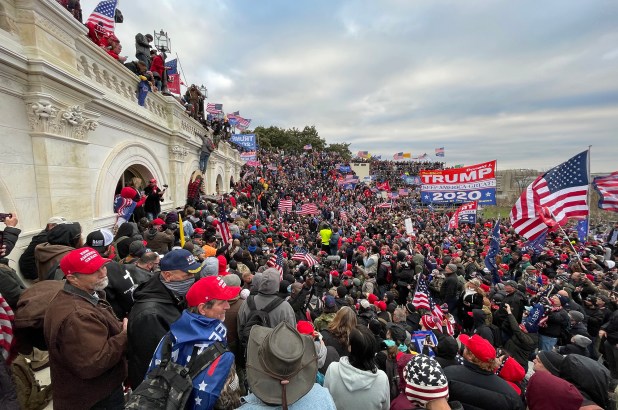 Protesters in support of Donald Trump rally outside the US Capitol building in Washington DC on January 6th, 2021
Stephen Yang for NY Post

A reputed leader of a far-right militia group charged in the US Capitol has previously worked for the FBI in a leadership role, his attorney claims.

A court motion filed Monday by attorney Thomas Plofchan says Thomas Edward Caldwell — who prosecutors say has a “leadership role” in the Oath Keepers militia group — worked as an FBI section chief from 2009 to 2010 following his retirement from the Navy as a lieutenant commander.

Caldwell, 66, of Clarke County, Virginia, has also held a top-secret security clearance dating back to 1979 that required multiple background checks and ran a consulting firm that did classified work for the US government, according to Plofchan’s motion.

“He has been vetted and found numerous times as a person worthy of trust and confidence of the United States government, as indicated by granting him Top Secret clearance,” the attorney wrote.

The filing seeking Caldwell’s release from custody ahead of trial on charges that he coordinated with two other alleged Oath Keepers to storm the Capitol on Jan. 6, citing his military career while insisting a “service-connected” injury to his shoulder, back and knees would have prevented him from storming the Capitol.

After leaving the Navy as a “disabled veteran,” Caldwell had failed spinal surgery in 2010 and was later diagnosed with post-traumatic stress disorder, the filing states.

Caldwell, who denies being a member of the Oath Keepers, was arrested on Jan. 19 on charges of conspiracy, obstructing an official proceeding, destruction of government property and unlawful entry on restricted building or grounds. He’s among roughly 200 people who have been charged in the violent uprising designed to stop the certification of Joe Biden’s presidential victory.

It’s unclear whether Caldwell was hired directly to work as an FBI section chief or if he had other positions in the federal law enforcement agency. The filing notes he was paid as a GS-12 federal employee — generally held by “white collar employees in mid-level positions” earning up to $86,000 annually, according to a website on federal compensation.

That pay grade is significantly lower than the expected salary for a section chief, WUSA reported.

Caldwell has been detained in Virginia since his arrest. The government had not filed a response to Plofchan’s motion as of Tuesday and no hearing on the filing had been set, the station reported.

A message seeking comment from Plofchan was not immediately returned Tuesday.

FBI officials, meanwhile, declined to discuss the claims contained in the attorney’s motion.

Federal prosecutors say the Oath Keepers are a large but loosely organized group of militia members who think the government has been taken over by a “shadowy conspiracy that is trying to strip American citizens of their rights,” court documents show.

The group will “accept anyone” as new members, but focuses on recruiting current and former military, law enforcement and first-responder personnel, prosecutors allege.