The “Islamic Terrorism” groups and US “Insurrectionists”

“American ISIS groups are similar to their foreign counterparts in a number of ways.”

Money and psychology also appear to be the common elements.

This is the second professional observation on this subject: the similarity between the presumed “Islamic Terrorism” groups and US “Insurrectionists”. The first one was by the Gen. McChristal on the similarity with Al Qaeda:

“This observation is astute, original, professional, and I think, it very well might be correct. Explanation and hypothesis: both “MAGA” and “Al Qaeda” stem from the same source and have the same parents, that is why they look like siblings. We may call this interesting family by the variety of different names: KGB, GRU, FSB, etc., etc., but the essence  of its nature manifested by the observed signs points in a certain direction: German Military Intelligence; the New Abwehr. The General has a good military sense of smell. And he himself might have been one of their targets too.” – 4:15 PM 1/16/2021

These two good expert observations make the initial pattern for the Counterintelligence Analysis of the Capitol Riot of 1.6.21, and taken together, they lend even more support to this hypothesis of the “paternity test”, with the New Abwehr and GRU as the first line contenders.

The role of insurrectionists with military backgrounds is also of note. 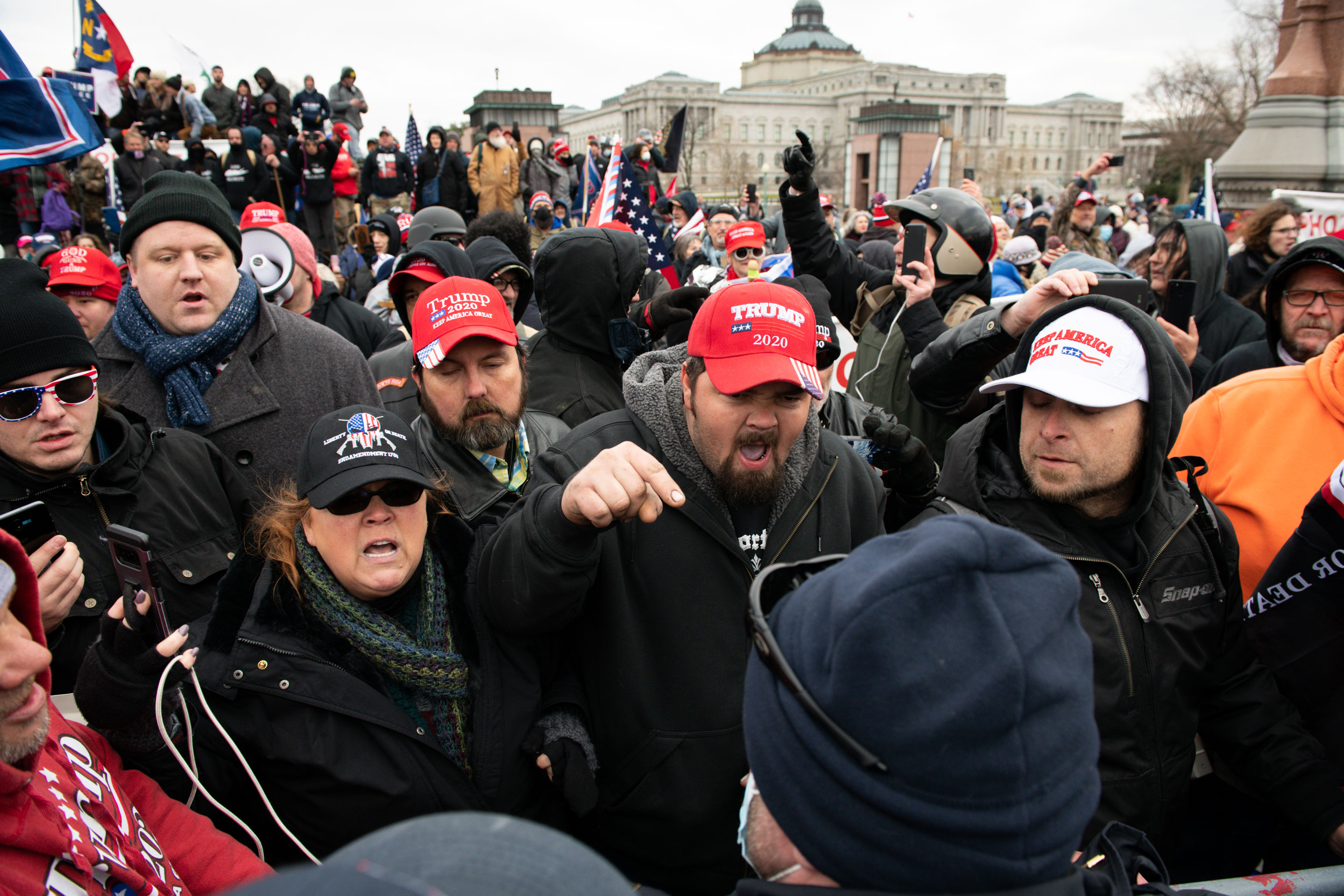 Capitol insurrectionists: They have a lot in common with ISIS

Following the Capitol riot earlier this month, Congress is taking actions against those it holds responsible. House Democrats have committed to sending the article of impeachment to the Senate on Monday, and Democratic leaders are pushing new domestic terrorism legislation.

In addition, a federal judge in Arizona last week denied bail to  the “QAnon Shaman,” Jacob Chansley (also known as Jake Angeli), because the judge did not have confidence Chansley would appear for trial. Chansley was the most prominent figure in the attack on the Capitol earlier this month, but he was not alone in his zeal to possibly kidnap or kill officials. Decked out in a horned headdress, prosecutors allege there is strong but indirect evidence that Chansley and others may have intended to capture and assassinate members of Congress.

Beyond Chansley, it’s clear that members of Congress had good reason to fear for their lives as people roamed the halls chanting to hang Mike Pence and “Execute the traitors” while carrying zip ties to restrain targets of opportunity. The FBI and Department of Homeland Security both had internal intelligence of violence aimed at lawmakers, and as criminal trials begin, more evidence of intent is likely to surface.

It’s not a long road from zip ties and threatening to kidnap or assassinate officials to the atrocities committed by the terrorist group ISIS. Chansley’s now-suspended Twitter handle was @USAwolfpack, but a better social media nom de guerre might be @TheRealAmericanISIS.

It’s now clear that the most serious threat to U.S. national security is not a foreign terrorist group mounting an operation on our soil, but domestic extremists like Chansley conducting operations against our government.

American ISIS movements are not just a threat to the federal government. Armed terrorists successfully disrupted the Michigan legislature’s functions and planned to kidnap the governor.

What would these extremists have done to Gov. Gretchen Whitmer after they kidnapped her? They’d planned to kill police if they had to; does anyone really think they hadn’t considered killing Whitmer too?

Domestic terrorism has been listed as the top threat to the homeland by the FBI since at least 2019. Among all such movements, white supremacist and “other far-right-wing” groups pose the biggest threat. That is, far-left-wing groups pose much less of a threat, so statements trying to make them out to be equivalent with the right-wing threat are simply wrong. Indeed, since 9/11, right-wing groups have killed more Americans than foreign terrorists and accounted for 73% of all incidents of terror.

American ISIS groups are similar to their foreign counterparts in a number of ways. American terrorists are loosely organized around a core set of beliefs, but are not hierarchical and not in agreement on everything. Such groups form around charismatic leaders who feed their followers a sense of grievance, while simultaneously hinting at a return to power, a return to the “real” America. Over and over again, the rhetoric on social media is that this renaissance of the “real” America won’t happen until the so-called illegitimate leaders currently in power are defeated, or worse.

And just like ISIS, this is at its foundation a religious narrative. (To be clear, I consider this a Christianist interpretation, not legitimate Christianity.) The model for the American ISIS is the Apocalypse story of the Judeo-Christian Bible. The “chosen” people, the real patriots, will try to take back power peacefully at first. But charismatic leaders of the movement (which today includes Donald Trump), then warn that the deep state conspiracy of (insert your favorite slander against liberals, Blacks, Jews, women, Muslims, or the like here) may force more drastic measures.

What measures? The prophets don’t say; they only hint, as in the former President’s speech inciting the attack.

“If you don’t fight like hell, you’re not going to have a country anymore,” Trump said, followed by his characteristic pause and nod suggesting things unsaid.

“Pick a side. Choose wisely,” Eric Trump, the former President’s son, dog whistled for the rally crowd, a statement well-steeped in the language of American extremism.

Members of the movement understood these hints, which Trump and those in his orbit have been dropping since the election. “Get lynched by Patriots” read a popular insurrectionist meme used to fire up attendees. (I’ll leave the important dissection of the racial element of that statement for another day.)

To the crowd of mostly white, Christianist men feeling the sting of their fictional oppression, the message of all the winking and nodding was clear: Bring guns; your government is captured by extremists; you are the “real” nation; take back your country; and find meaning for your lives in the sacrifice you’re making in this sacred war. After all, the symbols of these groups repeat the idea of a spiritual war.

To put it as late ISIS leader Abu Bakr al-Baghdadi did, the work of such leaders is to “incite the believers and be patient.” Don’t forget that al-Baghdadi also matched our homegrown ISIS in his belief in a Jewish-Soros-feminist-liberal cabal, an Islamist instead of a Christianist QAnon.

Chansley and other leaders of this diffuse ISIS-like war on the American government are the biggest threat the country faces. But they are not allied to both sides of our political divide. If we don’t face this fact, we leave ourselves open to more attacks.

The Republican Party needs to denounce these movements in the same way it has denounced the actual ISIS. That means giving a straight read to the evidence against former President Trump and conducting a full investigation into members of Congress who may have aided our native ISIS. Republican leaders can’t go into this process afraid to convict; they must be willing to see these insurrectionists for who they are, terrorists little different from ISIS.

Matthew Schmidt is an associate professor of national security and political science at the University of New Haven and author of Putin Was the First Alt-Right President.

The post The News And Times – Blog Posts Headlines | 6:09 AM 1/23/2021 – The presumed “Islamic Terrorism” groups and US “Insurrectionists” are similar in various features, which points to the same hypothetical origin: the New Abwehr and the GRU. first appeared on The Brooklyn News.